Part of my "Technology First" series.

If you have been in the classroom for a while, you are well familiar with Bloom’s taxonomy. If you are knee-deep in Common Core, you know all about Webb’s Depth of Knowledge (DOK) which, simplistically described, is an update to Bloom’s. In the technology sphere, there is a similar model that has a practical connection to the Bloom’s and DOK, but has been built around levels of technology integration in the classroom. This is called the SAMR Model and it has become very influential in the educational technology universe. There is a second model that has also become widespread, it is called TPACK which is really more about the teachers preparation and the interaction of their skills than it is about the particular lesson. These two models will be the focus of this post. If you spend any time in Edtech circles, or go to any training on technology integration, you will encounter these two acronyms sooner or later.


Background on SAMR
SAMR was created by Ruben R. Puentedura to describe the levels of tech integration in a classroom. As you move higher in the model, you get closer to the kind of learning that excites teachers and students alike. The fundamental goal is not to recreate a paper model of learning using a computer, it is to be able, at least sometimes, to do things that you could not do before you had technology. You might describe this as reimagining rather than recreating existing teaching methods.

A great many teachers introduce technology into their classroom and barely change the way the teach. The device is the new notebook/textbook/pencil. It can be so much more. Technology integration can transform learning and make student into creators and teachers. If SAMR is new to you, look through the descriptions and information below and reflect on where your technology activities fit in the SAMR hierarchy. Not everything has to hit the highest and most complex level, but it should always be a goal to be pushing toward that high level with some of the activities that we accomplish in a classroom.

Levels of SAMR
SAMR has four levels, these are generally placed in two groups. The bottom two, substitution and augmentation are grouped as “enhancement” strategies and are within the ability of almost any teacher. The next two levels, modification and redefinition are a step up and will take effort and creativity, first from the teacher and later from the student. These two levels are grouped as “transformation.”

SAMR Resources
See the blog post: SAMR and Bloom's Taxonomy: Assembling the Puzzle by Ruben Puentedura, and a video introduction to the SAMR model. The three different presentations by Dr. Puentedura below are an excellent places to learn more about SAMR. If this is new to you, stick with the first one, if you are looking to sharpen your knowledge move on to two and three.


To find more information from Dr. Puentedura check out his blog. You can find additional helpful information on SAMR prepared by Kathy Schrock.


TPACK
TPACK is a way of describing the interaction between three elements: Technological Knowledge, Pedagogical Knowledge, and Content Knowledge. Each successful teacher requires a deep understanding of all three elements. What TPACK brings to the picture is a method for explaining the interactions between these elements, and possibly helping the individual teacher reflect on missing competencies in order to point them toward areas of needed professional growth. For an indepth explanation of these areas see TPACK Explained. To learn about making TPACK part of your activity planning, see this set of resources on activity types for different grade levels and subject areas.

by Jeffrey M. Welch In the summer of 2016, I had the opportunity to give a training at an Edtechteam summit in Stanislaus County. I chose to build a training around Google Sheets. My reasoning was that Sheets is both incredibly powerful, and often intimidating to users. My concept was to teach users everything they needed to know to get started in one-hour training. Secondarily, I was hoping to prep teachers to take the Sheets portions of the Google for Education Level 1 and Level 2 exams. I have now done this training three times, with substantial modifications each time. Version 1.0 - was a one-hour training with around 20 teachers. It went well, even if a bit too fast. This entire training took place within a single spreadsheet broken up into tabs. Version 2.0 - I beefed up the instructions and added several activities for a Google Certification Bootcamp with the idea that the learners would mostly go through it on their own. Version 3.0 (current) - I decided to break th 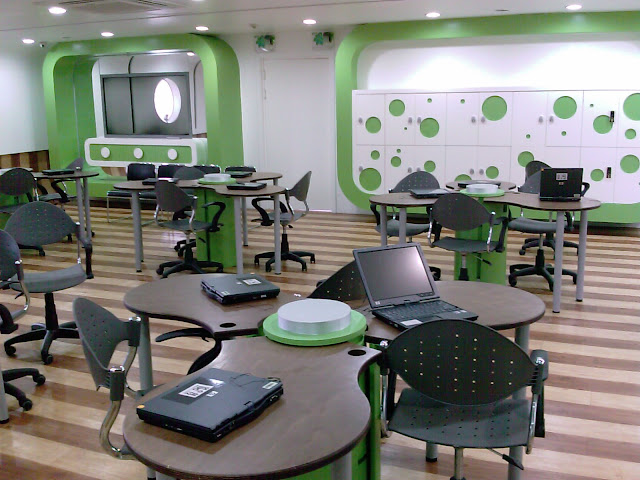 by Jeffrey M. Welch Part of my " Technology First " series. For the 2015-2016 school year, a few teachers in my district were given dedicated sets of classroom Chromebooks to use with our students. While some school districts have already made the leap to a 1-to-1 technology deployment, we have not yet jumped in the deep end. Creative Commons Licence: Source: https://commons.wikimedia.org/wiki/File:Elearnroom.jpg Sadly, not my classroom! My colleagues and I were tasked with charting the path forward for our district’s teachers. In discussions with a few collaborators we made a decision to go a little farther than integrating technology, we chose to abandon all that came before and choose Technology First . This post will explain a bit of the logic, results, and implications of that decision. Here is what we told our students on day one: This class is designed using a technology-first model. The class will operate with minimal use of paper, either given